Dead Locks are one of the most popular choices of locks due to the exceptional security that they provide. Many of these locks are insurance approved and conform to current British Standards. What makes them so secure is that they can only be operated with the use of a correct key. While you are out they can be locked so that a burglar will be unable to unlock the front door from the inside without a key, making their attempts to remove any bulky items from your home extremely difficult and possibly deter them altogether. It’s not recommended to lock from the inside while you are home due to fire safety. If a fire breaks out and you are unable to get to the keys or operate the lock, you could end up in a deadly situation where you’re trapped inside and unable to escape. This deadlock is available in a range of different sizes and finishes. Keyed alike in house and also masterkeyed in house. Supplied with 2 keys and meets BS EN 1303:2005 key security grade 6. 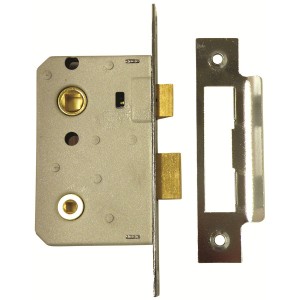 Secure Bathroom locks made my ERA. Deadbolt locked or unlocked by turn from inside or by emergency release from outside. Available in two different finishes (Chrome or Brass). Available in either Brass, Chrome or Satin Chrome.