How To Fix A Lock Filled With Super Glue

How to fix a lock filled with super glue 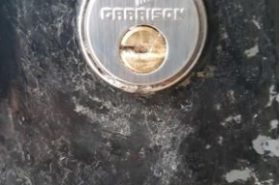 A tenant from a block in Mayfair called us to report the main entrance door of the flats had been vandalised. This was around 8 pm on a Friday night.

We attended site promptly and the engineer found that someone had put glue in the lock and therefore keys were not able to open the door. Remember this is a Friday night and there are 9 flats in the block, some of them home for the evening, some of them have not come home from work yet. This is a block managed by a client of ours, which is not available outside of working hours. They trust that we will take over any security emergencies on their behalf. Unfortunately, glued locks is a very common act of vandalism.

The engineer tried to remove the glue using various techniques, but it was dry and had hardened to the point it could not be removed. The only option he had was to remove the cylinder and replace it. The engineer replaced the cylinder with a like for like Mul-T- Lock and sent the code to the office for more keys to be cut.

Within two hours the lock change had been completed and new keys were on their way to the tenants/occupiers of the nine flats in the block.

Unfortunately, the next morning there was another call from one of the tenants informing us that again, someone had put glue in the locks. This time we got to site before the glue had dried,
allowing the engineer to clear the glue from the lock and ensure that it was working as it should.

The following Monday, we sent a full report for both visits to the management company along with some photographs of the affected lock, before and after our work. Another happy client!